The ceremony is set for Monday, October 10 at the East Stronghold in the Coronado National Forest, beginning at 10:00 am.

This famous event took place in 1872 in the Cochise Stronghold of the Dragoon Mountains and (temporarily) ended the Apache's war with the Whites. It also established the Chiricahua Indian Reservation, which was disbanded by the government four years later.

The Treaty of Santa Fe, ratified in 1853, failed to effectively delineate Chiricahua Apache Nation territory, and with the subsequent violations and inability of the US to enforce crimes against the Apache, warfare continued for years.

The agreement itself never became a treaty, as in 1871 Congress removed a president’s ability to enter into such treaties with Native Nations, transferring that power to Congress. The agreement became a clarification, and codification of the principles behind the Santa Fe Treaty.

Descendants of both Cochise and General Howard will be present at the ceremony, as well as other Chiricahua Apache.

There is no charge to attend, nor is it necessary to RSVP. It is recommended that you bring your own lawn chair, since there is no seating in the area.

Specially minted coins, commemorating the anniversary, will be available at the site for purchase, for $5 each.

Location: The ceremony site is eight miles off Highway 191 in the Coronado National Forest:

Directions: From the small town of Sunsites on Highway 191, take Ironwood Road westbound. After a few miles, the pavement ends. The road becomes dirt but is well-graded, even for low-clearance vehicles. At eight miles from the highway, you will see an open meadow on the left side. This is the location.

For more information about this special, historically significant event sponsored by the CCHS, call president Bill Cavaliere at (520) 558-2580. 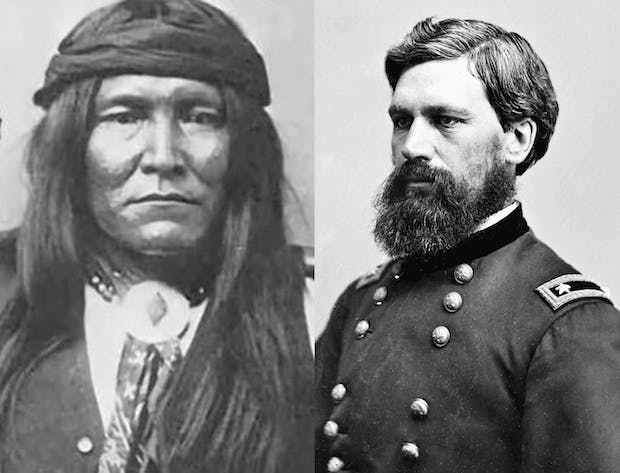 Liked by Andrew Paxton and 1 other